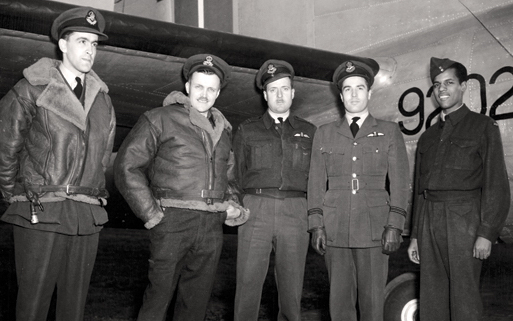 At the end of WWII, the United Polish Relief Fund appealed to the Canadian government to deliver penicillin to Poland. In October and November of 1945, the Royal Canadian Air Force (RCAF) managed to deliver five tons of penicillin to Poland, the only humanitarian flights the RCAF would be able to make into the Soviet Bloc until after the Cold War.

On one of these humanitarian missions, the Fortress 9202 crashed into Eggeberg Hill, near Halle, Germany, killing all five RCAF members on board. My mother’s first husband, and father of my dear sister, Kate, was one of the pilots on that fateful flight. They sacrificed their lives for their country. They died for humanity. Watch a short video recounting their story. (Flt.-Lt. Donald Forest Caldwell, Mountain View,AB; Flt.-Lt. Edward Pattern Harling, Calgary, AB; Squadron Leader Alfred Ernest Webster, Yorkton, SK; Flt.-Lt. Norbert Davis Roche, Montreal, QC; Sergeant Edwin Erwin Phillips, Montreal, QC)

Martin Luther King Jr. once said that an individual has not started living until they can “rise above the narrow confines of their individualistic concerns to the broader concerns of all humanity.” Rising above our self-serving desires and problems and looking toward a contribution to the community isn’t just good for the community; it’s good for your own well-being and mental health.

As we approach another Remembrance Day in Canada, may the memory and honoring of our veterans serve as an inspiration to rise above the “narrow confines of our individual concerns” and to lift our eyes to the horizon of humanity. Let the death of these five men, along with all who served and sacrificed, serve as an inspiration as they placed the call of humanity above personal danger. To expand on the words of Martin Luther King, Jr., “Let’s make a career of humanity … and you will make a greater person of yourself, a greater nation of your country and a finer world to live in.” The ultimate measure of a person is not where they stand in moments of comfort and convenience, but where they stand in times of challenge and controversy.

We remember and we will never forget. But let’s not just be touched on this Remembrance Day. Let’s be inspired to act differently. And then let’s look around, roll up our sleeves, and get to work making this world a better place.

JEKA AND THE POWER OF ONE: How Ordinary People Can Make An Extraordinary Difference

Self Leadership – Leading As A Work Of Art

Accountability Quotes: A Request Is Not An Agreement